I couldn’t want for TBBT to start. I have more recently given in to box sets, but before that, I too watched shows on a weekly basis. Once show that I really enjoyed was TBBT. I identified with Sheldon, worrying finding he quoted me. I found it a fun show, and as the series continued and new characters added – I found this did not diminish the show as one might worry that it could. 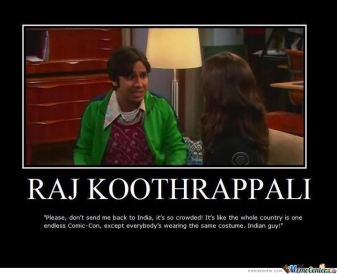 But watching an episode this evening (actually happening right now, the SO still watches it religiously) and I noticed something that has been done time and again.. and i am not sure if the meaning or agenda behind it is missing the point or nailing it exactly. In the scene playing out in my peripheral vision, we have 2 cars, 2 occupants in each car. Male passenger, and female driver in each. Cut to another scene where we have a male character standing in a kitchen wearing an apron. Visual emasculation even if not directed.

From previous episodes we know that Sheldon doesn’t drive, however, Leonard does drive so there is no reason for him not to drive. But it mirrors – so visually it is pleasing even if you aren’t really sure why, and it makes it easier to draw comparisons between the conversations going on in the car.

Back at the house, there are 2 male characters, and one female. But of course, yet again, we have the relationship of Howard and Raj questioned as well as Raj’s clear femininity. Does this make people uncomfortable? Or does it make the question usual gender roles?

For me, yet again it is the idea of the ‘man child’ that is yet again bought up in the show, and conveniently, having female characters helps them overcome simple tasks that would have been met with confusion. Amongst the main (male) characters, we have Sheldon who doesn’t drive, Leonard does drive. Howard drives a moped, and although Raj apparently does drive, there is little or no screen time given to this fact. We have a scene in a previous episode where all the male characters are in the same car, and it breaks down. They understand the principal of the combustion engine but can’t fix their engine. So they are emasculated again. Isn’t this what would happen to a car full of girls?

The boys in the show are so enveloped in their scholastic endeavours, they play computer games in their spare time, go to conventions, and collect comics. They to varying degrees have no social skills. Everything about them, their references, their hobbies, their job, speech patterns are all designed to make them stand out, to struggle to make themselves understood. And there are only so many series that could really be written about ‘and Englishman in New York’ so we find that Penny has more company, to help make sense of their journey’s, new directions and story lines can be written that gives the male characters more dimensions.

And in this, strange alternate universe… the women are dominant. In subtle ways, we have Bernadette who is better qualified than her husband, Penny, who is charming, pretty, and fits into any social situation with no effort, and Amy who is on the surface a perfect match for Sheldon, mentally and in her employment. But somehow still manages ot have greater social skills.

The more I watch TBBT the more I feel that it is making fun of these men, that instead of us being able to passively able to enjoy a culture that we love in a main stream format, it is exactly what we love that is being used to get laughs. And instead of finding the female characters empowered, and raised in profile, they are just carrying out the same duties that their mothers before them stereotypical would have done, and are having to run around for these men, who are to all intents and purposes still children. I mean who reads comics as an adult, or plays computer games?

Well the answer is a large portion of the population which is why the show has been so popular but I do genuinely suggest that the show at its very core is subversive in nature and I just don’t get any enjoyment from traditional gender roles being enforced but dressed up in a more modern way.